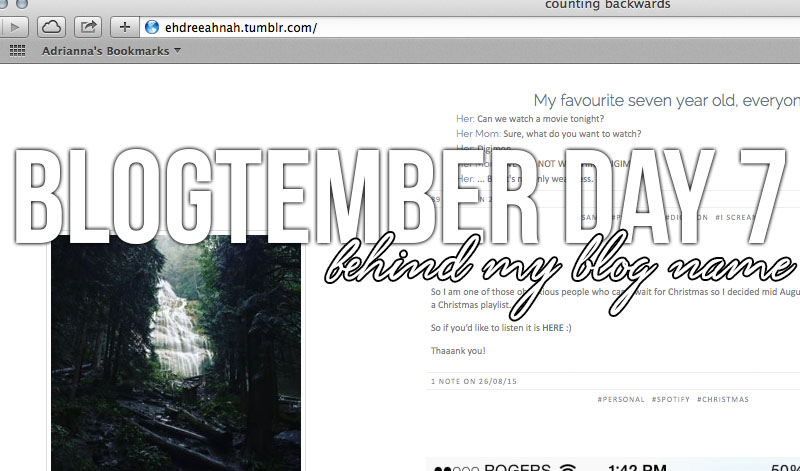 Monday, September 7th, 2015: Tell us about your blog name. Where did it come from?

My blog name is “ehdreeahnah”. I picked it because I wanted some kind of uniformity with my blog and other social media, and it is my tumblr URL as well as my Twitter handle. I had debated about making my blog name something totally different and went through a whole bunch of “how to name your blog” posts and pins, but decided to stick with names I had already used. My other social media names are “adriannamaryanne” and “adriannaarose”, but thought that “ehdreeahnah” was more creative, and for a blog based in creativity… it was like Cinderella’s slipper or something.

The actual process of coming up with “ehdreeahnah” for tumblr was because my username/ URL was originally “little–star” but you can’t tag people with hyphens in their username so I would get anxious if people were tagging me with stuff and I couldn’t see (yeah, I know). I wanted to do something with one word that would be unique to me. In school I would always get annoyed when people (French teachers always haha) pronounced my name as AD-rianna, so I used to clarify by saying A-drianna like I’M CANADIAN EH-DRIANNA. I liked the idea of something Canadian-ish so I went with ehdrianna but I figured that looked weird so I just made the whole thing a pronunciation guide of how to say my name: eh-dree-ah-nah. Alternatively it could have been aid-rihanna, but I’m glad I took the Canadian route with that one. Now I don’t ever think I could change my URL… and having it as my “big girl” blog as well as my tumblr blog just seals the deal!

If you have tumblr, give me a shout on there too! 🙂

Thanks so much for reading this post! If you’re doing Blog-tember, which day/ prompt are you most excited for? What Makes You Canadian?

Wreck This Journal: The …

What The First Thirteen …