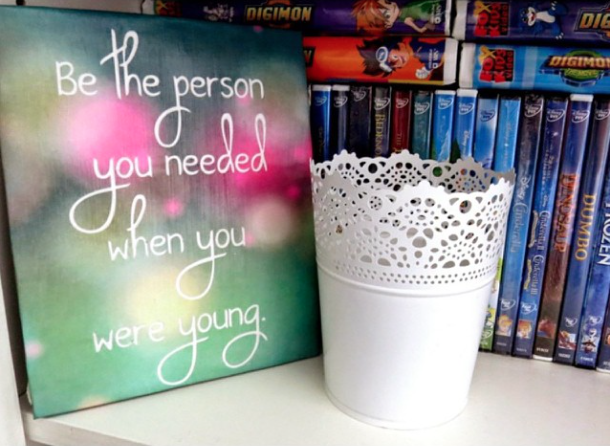 [The quote poster thingy in the picture was made with scrapbook paper, a dollar store canvas and my Silhouette Cameo. The lace vase is from Ikea (actually my church… my mom said I could have it, whoops).]
If you follow me on any social media you’ll know I’m obsessed with quotes. I actually made a big long post on this blog that you can find HERE regarding my long-term love of quotes 🙂
The way I’ve discovered quotes has definitely changed throughout the years as social media and the internet in general have grown. If you had told me I would soon be finding quotes that were screenshots of tweets on tumblr I (and anyone else) probably would have thought you were bonkers. Yes, bonkers.
Yet here we are.

I forget what tumblr blog I found it on but it was in my drafts for about a month. It’s one of those quotes that make you think. And it just sounds cool.
Most of the quotes I collected when I was in elementary and high school were copied and pasted just for that reason, they sounded cool. I never really cared if they applied to me or my life but just enjoyed the way those words were strung together. And if they rhymed, even better.
But post-secondary has ruined me and now I overthink everything.
Who did I need when I was young?
I am not going to lie, I had a pretty great childhood. My family went on amazing vacations, I have a great relationship with my parents who have been married for twenty-five years and I never had to share a bedroom.
But the whole friend thing was my problem.
All my life I was the “mother hen”. Maybe it’s from being the oldest child or always being a girl that played with dolls- from Barbies to Cabbage Patch and having a beyond creepy porcelain doll collection. When I started school I was a chronic befriender of the weird kids. I liked being nurturing and helping people and, well, being someone’s only friend.
I can trace it through all of my school years. I would make a friend, we’d get really close and then for some reason we couldn’t be friends anymore (moving/ changing schools/ her parents fearing I was going to make their daughter into a lesbian… not making that one up, unfortunately).
I was the weird girl. I always was. I liked Digimon and wore overalls and cornrows and wrote stories for fun.  I didn’t listen to the popular music, didn’t get clothes from the cool stores and apparently that doesn’t get you friends.
In grade five I made two friends (twins) that I decided were the real deal. We did everything together and even when they moved three hours away we stayed close. We’re still best friends after knowing each other for sixteen years and this fall I am a bridesmaid in one’s wedding. They were weird too. We played real life Neopets on the playground at recess and researched Ancient Rome for fun. Ten years after we met one of their boyfriends gave me two-hundred Digimon cards because he was told if I didn’t like him, he would be single again.
Theres nothing like meeting people that know you’re weird and different and encourage it.
Once I started high school I stopped hiding the things I liked and actively displayed Disney and Digimon and everything else on my binders and in my locker. I figured if people thought that was weird, I didn’t need to be their friend.
Acceptance comes in many shades and maybe my flavour seems very first-world-problem to you when there’s so much other hate and exclusion based on sex, race, religion, sexual orientation, class and so forth but I figure when people have been told they’re not good enough, it doesn’t matter why. I know I am a white, middle class, CIS female and so I know I have not faced challenges that many people have and I don’t pretend to have done so, but I try to be as accepting of people no matter what may make them different from me.
It’s okay if you like things or are things that everyone else thinks are not normal. If someone is going to give you a hard time for being different, they lost the opportunity to have a freaking awesome lifelong friend.
I wish someone had told me that when I was ten.
Adrianna.

What Makes You Canadian?

How I Organize My …

My Experience at (Canada’…